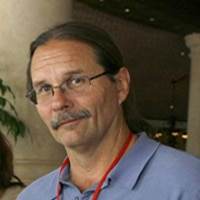 Jeff began his Round Table career in Palo Alto as a part time bartender in 1977.  He became a Round Table Pizza manager in 1978 & has been a Round Table Pizza franchisee since 1981.  He operates seven restaurants in Santa Cruz & Monterey Counties.  He has been a licensed California real estate broker since 1985.
Jeff served eight terms on the Round Table Owners’ Association board of directors & has held several board offices including nine years as the RTOA President.  He currently chairs two RTOA committees, Franchise Relations & Bylaw/Policy and has participated on several other RTOA Committees including QSC (chair), Convention & Budget/Finance.  He also served on the RTFC Franchise Advisory Committee. Jeff served on the American Franchisee Association board of directors & has been a panelist on several regional & national franchise conferences.
Jeff enjoys collecting boxing memorabilia & football nostalgia items from the early 1960s. Muhammad Ali remains his hero.
Jeff’s first son, Justin, is in the restaurant business for himself now.
Jeff & his long time better half, Kathleen, have twin boys, Benjamin and Nicholas (born in 2009) & both have indicated that they do not wish to work with their father.